As I have mentioned in previous posts, I have Type 1 Diabetes, and am very passionate about bringing awareness to and helping find a cure for this disease.  Of the many daily struggles someone with T1D faces, blame and misinformation are some of the biggest ones.  And actually, that goes for any diabetic, no matter what type you have.  So many people are misguided and misinformed about the differences between Type 1 and Type 2 diabetes, and there are so many myths as to what causes them.  So when I see a company that supposedly represents health and fitness putting insensitive and incorrect information out there, naturally I get angry.

Yesterday, the writer of the Twitter account for the CrossFit Corporation posted an ignorant, mindless, hurtful tweet regarding sugar and diabetes.  In case you didn’t see it, here it is: https://twitter.com/CrossFit/status/615539464232902656

“Make sure to pour some out for your dead homies.” -Greg Glassman #CrossFit #SugarKills

I feel like based on this alone, whoever writes for this Twitter account should be fired.  Besides the obvious fact that sugar doesn’t cause diabetes, this is blatantly hurtful to those with diabetes and those who have lost someone due to diabetes complications.  But no, it didn’t stop there.  After tons of backlash from diabetics everywhere, CrossFit not only continued to defend this heartless garbage, but continued to perpetuate lies about diabetes under the guise of being a “health and fitness” corporation. So I decided to read their follow-up tweets in response to the backlash they were getting.  I’m now going to debunk some of the most ridiculous of their follow-up tweets in a little segment I’m calling “What my dead homies and I would like CrossFit Corporation to know.”

1. ” Anyone can get T2 diabetes, even those with T1.  Stop assuming we don’t grasp the difference and help us raise awareness.”

Clearly you’re the one not understanding here dude. This is wrong on so many levels.  First off, the original tweet had nothing to do with “raising awareness.”  Stop acting like it did.  It was meant to be a self-righteous insult to those people who the CrossFit people deem “unhealthy.”  Secondly, a Type 1 diabetic CANNOT become a Type 2 diabetic.  Basic biology tells us that is impossible.  Type 1 diabetes is defined as a disease where the body NO LONGER has the cells to produce insulin.  It essentially means your pancreas is just a useless organ taking up space.  Type 2 diabetes means that the body still makes insulin, but uses it incorrectly.  That alone should tell you what you need to know.  There is no way my pancreas can magically start working again and start producing insulin, just to start using it wrong and turn me into a Type 2 diabetic.  A Type 1 diabetic CAN develop insulin resistance, which is a symptom of Type 2.  But, by definition, a T1D can never become T2 because the body will never again produce insulin and therefore you remain insulin dependent.

2.“…know that when we point to big-soda products causing diabetes, we are referring to Type 2 diabetes…”

It’s ok to say that soda is not good for maintaining a healthy lifestyle.  But that’s not what CrossFit did here.  What they did was A: Wrongfully name sugar as a CAUSE of diabetes (it isn’t) and B: Shame those with Type 2 diabetes by saying they gave themselves this disease because they drink Coke.  Even if this tweet was aimed at Type 2 diabetics, it’s not ok to shame anyone or blame them for this disease. Type 1 diabetes is an autoimmune disease and not is not preventable or caused by lifestyle factors.  Type 2 diabetes is caused by genetics and lifestyle, and sugar contributes to that overall, but sugar alone is NOT a cause for Type 2 diabetes.  And here’s a newsflash for you:  If all soda went away tomorrow, diabetes would still exist.

3.” We see tons of T1’s that should know the difference and not get so offended by their own assumptions about what we meant.” AND “…maybe you could explain to your son that our parody is clearly aimed at type 2 diabetes.”

These were just a few of the many tweets that followed.  Instead of clarifying and apologizing for offending millions of people, this person continued to post insulting tweet after insulting tweet.  At this point I am making it my personal mission to complain until this person is fired or the company issues an apology for its conduct.  I can’t fathom what kind of business could be so rude and insensitive to the general public and think they won’t lose customers.  And especially for a company that thinks it’s the ultimate in human fitness, a little research and education could go a long way.  It is completely irresponsible to perpetuate misinformation and encourage disease shaming.

So, Mr. CEO Greg Glassman, I really hope you are learning something in this experience. Now what you need to do is STOP the offensive tweets on this subject. Stop digging yourself an even bigger hole. The diabetes community will now be expecting 2 things from your company: 1: A public apology for shaming all diabetics and spreading out-right lies about diabetes, and 2: A sizeable donation to a diabetes-related charity.  Own up to your mistake and do the right thing.  After all, with so many diabetics in the world, do you really want all this bad publicity? 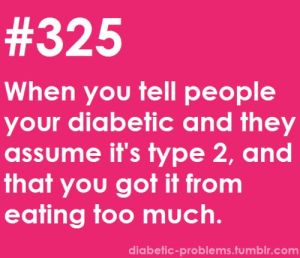 For those of you that have neglected to read my “about” page, (wink, wink) I have type 1 diabetes.  I am coming up now on 19 years since my diagnosis.  It is important to me to raise awareness, but at the same time, I don’t talk about it very much.  Or more specifically, I don’t COMPLAIN about it very much.  I try not to.  This is the hand I was dealt, and I am managing it the best I can.  However, if you don’t want to hear a bit of a T1D rant, I suggest you stop reading now…

Every diabetic at some time or another, even the most well-managed ones, will have a bad diabetes day.  The dia-monster has come out to play with no warning and no explanation, and is here to wreak havoc on your day.  The monster is alive and ready to play.  And he does not play fair.  That was my day yesterday, and today.  He brings me up, then down, then up, then down, crashing (well, bouncing really) over and over again.

I woke up low, 52. I drank some juice, took the drama tween to school, and came home.  Blood sugar now in the 60’s.  Drank some more juice and was feeling super nauseated, so I went back to bed.  Flash forward 3 hours later, and I wake up, test, and am horrified at the number: 234.  What?! Why?!  Seriously?  So, I bolus the appropriate amount, eat some lunch, and everything seems to be semi-stable for now.

About 5:30pm I drop again.  Inevitably, while I’m driving, and of course do not have any glucose tablets with me. Well played, diabetes.  Well played.  I manage to make it home and proceed to eat half a jar of peanut butter.  (In hind sight, this wasn’t my best decision, but when I over-treat my lows, it’s not pretty!)  At this point I’m feeling super cranky and terrible.  And then for the rest of the night, I just stay high.  I try to sleep, with no success.

So I go out to the couch around 1:45 and turn on the tv.  It’s astounding how terrible late-night tv is.  Needless to say, I was pretty bored.  (Hence the title about counting my teeth lol) But no rest for the weary.  Gotta keep checking, gotta keep bolusing.  At this point I have switched to injections just to get back to normal.  (A 2:00am reading of 502 definitely kicked me into gear on that one!)

And then before I know it, it’s 6am again and time to get the morning started.  I get everything done, blood sugar still in the 200’s, bolus some more,  and go back to bed.  Wake up at 11:00 still in the 200’s.  At this point I change out my pump infusion site.  Probably should have already done that, but I had JUST put on a new one.  Those things are like gold ya’ll!  Can’t be just wasting them!

As I type this post it is 6pm and my blood sugar is now 105.  36 hours later, I finally have an acceptable reading.  Now comes the fear of another serious drop, but I’ll cross that bridge if and when I come to it.   And I still have no idea what caused all that.  I didn’t do anything or eat anything out of the ordinary, and the pump seemed to be functioning fine.  But what I’ve come to learn with the dia-monster is that sometimes you can do everything right and you’re still gonna have days like this!  It’s just a way of life with a chronic illness.  What I also realize is that I may be chronically ill, but I’m also chronically awesome!

In closing I will just say, try to remember that we are all dealing with something.  Just because I don’t talk about my struggles with T1D that much and play it off like it’s no big deal, doesn’t mean it isn’t a daily struggle for me to manage this horrible disease.  It’s 24/7, 365.  It never quits.  And so, neither do I! 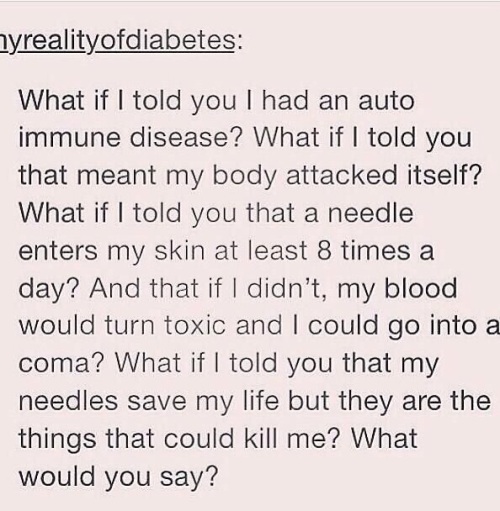